Rheumatic fever was a common infectious disease until around the middle of the 20th century, and was a major cause of childhood mortality and rheumatic (structural) heart disease.

In developed countries, the incidence rapidly declined during the second half of the 20th century, however it remains a common and important disease in developing countries and amongst indigenous populations, particularly in Australia, New Zealand, the Pacific Island nations, and to a lesser extent in South America.

It is the result of infection with Group-A beta-haemolytic streptococcus (GpA BHS). These infections are typically pharyngitis or tonsillitis, and less commonly scarlet fever or skin infections.

Rheumatic fever typically begins several weeks after the initial infection – which has often resolved by this point. It is thought that antibodies produced to streptococcal proteins begin to react against cardiac and other tissues.

As well as acute rheumatic fever, there is also a recurrent from of the illness – with episodes of fever months or years after the initial infection (thought to be due to re-infection). About 50% of patients will go on to develop rheumatic heart disease in the long term – the risk is higher in those who have recurrent episodes of fever.

It it not only the heart that is affected, but also skin, joints and nervous system.

You should suspect a diagnosis of rheumatic fever in any patient who presents with chorea (neurological signs) or carditis, without another identifiable cause.

Diagnosis is based on the Jones Criteria.

Management aims to control the symptoms of the arthritis, skin manifestations and chorea, but it is the carditis that is the most serious manifestation of rheumatic fever. It can lead to heart failure, and in some cases, can be fatal in the acute phase.

In the long-term, any patient who has had previous rheumatic fever, is at almost 50% risk of rheumatic heart disease. This typically manifests as mitral value disease, although other valves can be affected.

The exact pathology is not well understood. It is caused by Group A beta-haemolytic streptococci, of which there are many types. Those with the M antigen are most likely to cause Rheumatic Fever.

Diagnosis is based on the Jones Criteria. For diagnoses, the following are required:

Even when the diagnostic criteria are not met consider rheumatic fever is any patient with chorea or carditis without an obvious cause. 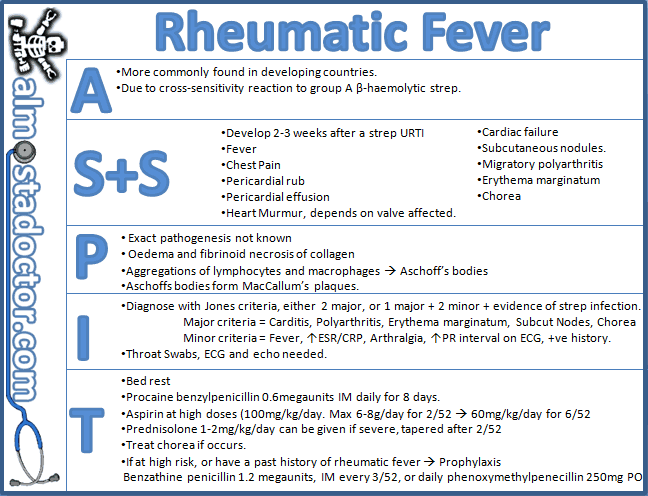