Polycystic ovary syndrome – PCOS (aka Hyperandrogen Chronic Anovulation) is a very common cause of amenorrhoea and oligomenorrhoea. It is important as it is associated with systemic features, including acne, decreased fertility, excessive andorgen secretion and insulin resistance.
The cause is unknown.
Typical presentation

Occurs when the ovaries are stimulated to produce excessive amounts of androgens, usually from excessive release of LH, although hyperinsulinaemia also has a similar effect and plays a role in many cases. The ultimate cause of either of these factors is not clear.

Typically presents between mid teens and mid 20s. Symptoms may include:

Symptoms usually begin around the time of puberty, and worsen at the patient gets older.

According to the Rotterdam criteria at least TWO of the following is diagnostic:

Note that these criteria do not necessarily require any formal investigations.

However – be wary of diagnosing teenage girls with PCOS based purely on the above criteria. Symptoms of puberty (such as acne, and irregular periods) can mimic those of PCOS. As such, a 2017 international consortium suggested that in teenage girls, more stringent criteria are required:

A polycystic ovary as shown on USS

PCOS is a lifelong condition. Early diagnosis and treatment minimises the risks of complications and improves quality of life. In particular, warn about the risks of diabetes and increased cardiovascular disease risk.

Treatment of hirsutism – if a problem, consider cosmetic treatments (hair removal) or an anti-androgen e.g. cyproterone (an anti-androgen prednisolone – which is available in some CHC preparations).

The risk of infertility increases with age, particularly after the age of 30. Advise patients to consider starting a family as early as practicable. Lifestyle factors (particularly weight loss) improve fertility.

Also be aware that there is a higher incidence of gestational diabetes in women with PCOS (thought to be >2x risk), as well as increased risk of premature birth, and pre-eclampsia. 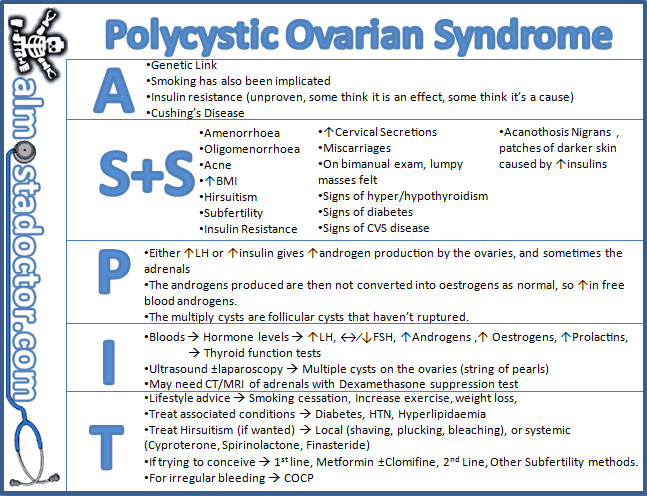